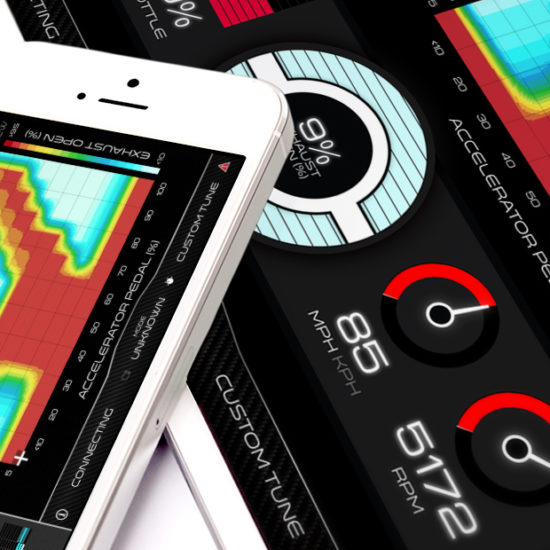 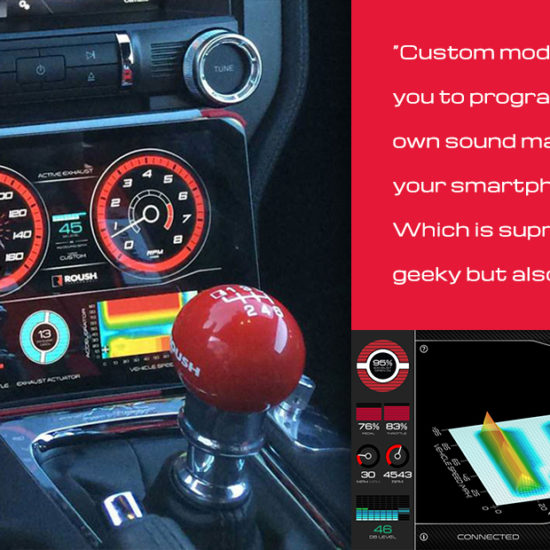 RESULTS:
Roush Performance sought NewFoundry’s expertise to design and engineer a mobile app for its new Active Exhaust product. Forged by NewFoundry from the ground up, this challenge leveraged our unique blend of design, UX/UI, and embedded software engineering expertise to provide a unique, wireless interface between drivers and Roush’s unique exhaust sound “tuning” product.

Active Exhaust first made waves when it appeared as a demonstration at SEMA in November 2014. Car & Driver later wrote about Active Exhaust as part of an introduction of Roush’s Stage 3 Mustang. The story included this little gem of a quote that we have decided is our all-time favorite published commentary about one of our products:

“Custom mode allows you to program your own sound map from your smartphone or tablet. Which is supremely geeky but also kind of rad.”

Car & Driver later wrote a thorough, top-down review of Active Exhaust focusing on the mobile app interface, with this quote nicely summing up their expert opinion:

“…it works flawlessly and creating tunes is dead simple and intuitive after you’ve done your first.”

The app works by communicating with internal vehicle electronics via a wireless OBD-II interface. It provides an elegant, streaming display of vehicle speed, accelerator pedal position, ambient decibel levels, and throttle position in addition to the current state of the Active Exhaust system to allow the user to visualize the relationship between driving actions and exhaust sound. The app also allows power users to create their own custom tuning of the exhaust sound and save their tunings to the vehicle.

The companion app, credited with significantly increasing take rates on the Active Exhaust product, marked the start of a long-standing product development partnership between NewFoundry and Roush Performance. “Today is a big milestone,” NewFoundry CTO, Chris Myers, remarked at the time of the app’s release. “But I know that when it comes to fusing tech and performance, it’s just the beginning of what’s possible.”